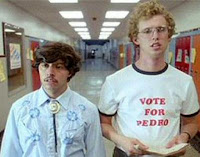 This blog has never been used as a platform for political discussion. I've never endorsed a candidate, I've never made reference to a party affiliation, and I've never criticized an elected official. I've purposefully avoided these topics for three reasons: 1) Voicing political opinions opens the door for a great deal of personal criticism--and we all know that I handle criticism as well as I handle fire ants in my underwear; 2) I think it's perfectly appropriate to keep my political opinions to myself; and 3) Politics don't bring out the passion in me--those fiery feelings are reserved for HGTV and barbecue flavored potato chips, thank you very much.
And you know what? You can bet your step-uncle's ass that I'm not about to get all political on you this Tuesday morning. I will remain opinionless, voiceless, and you can just keep on guessing how I feel about our presidential candidates.
Despite my lack of desire to share my thoughts, I can't deny that I've got politics on the brain. And who can blame me? I've spent the last few weeks hanging out in states that border New Hampshire, my brother-in-law begged for a Mitt t-shirt for Christmas, and my other brother-in-law spits rat poison at the mention of anything Republican. I've been inundated with opinions and questions about my candidate of choice--and wow--I'm shocked by the sweeping generalizations that people have pinned on me.
I've heard each of the following at least three times:
Generalization: You're Mormon, so I'm sure you're voting for Mitt Romney.
My response: I'm Mormon, but if I vote for Mitt it will only be on account of his great hair. It's also obvious that he works out, and I value that in a candidate.
Generalization: You're a woman, so I bet you're voting for Hillary.
My response: Who told you that I'm a woman? And even if I was a woman, I'd only vote for Hillary because I believe that her pantsuits fit well.
Generalization: You're young. Aren't you voting for Obama?
My response: He's hot, so yeah, probably. Thanks for the advice.
Generalization: You're Mormon, so you have to be a Republican.
My response: Wow, you're sharp. I still don't understand how Harry Reid is getting away with it. Do you?
So there you have it. This post was my long way of saying: No, I won't endorse a candidate on this blog. Well, I take that back...Vote for Pedro, he seems nice.
Posted by Amy

That is great,
I am drawn between Pedro and Ferris Bueller

I vote for tater tots.

I always figure that on blogs of our kind, it's best to keep the content similiar to a first date: no discussion of politics or religion. It's superficial, yes, but like you said, opening the discussion seems dangerous. Although, it would likely mean mucho comments!

Sorry to have to disagree with you, Amy. Even Michael Scott on The Office looked better in a women's pant suit than Hillary does, and he's a guy, and I don't know anything about women's pant suits so that should tell you something.

Love it! I'm glad you're staying politikkk-free - I have a feeling 2008 is going to bring out some heated words in our little blog world!

You and I have so much in common. I refuse to talk politics on my blog or even with my friends and family, mostly because it would be obvious that I didn't know what I was talking about, but also because those are my private opinions.

Also, I agree that Obama is hot. Wait. I've said too much haven't I?

I love this post, Amy! I wish I had written it!

Amen. I'm sick of the assumptions. And I have two brother-in-law's that sound identical to yours!

I vote for dirty martinis.

I wish more eligible voters would wake up on election day and get to the polls. As far as I'm concerned, if a person takes freedom for granted and doesn't appreciate our right to vote, they should then shut up. If you don't care enough to vote, don't complain about the government!

Off my soapbox now. Thank you.

at least with pedro, I know my wildest dreams will come true

As always, love your responses :)

Great post! When I was a little kid and went to the polls with my mom, she wouldn't even tell me who she voted for. She always said that's private! I agree.

So, how's the house/office hunt coming along?

Today in my class our instructor (Sergeant) asked a seaman (I share my class and Air Force base with the Navy and the Army) to name someone whom he disliked immensely. He answered 'George Bush'. He got in trouble and we all nervously laughed at him. Thats as much politics as I've discussed in the last 7 years of my life. I vote for Amy Lawson! And your great pantsuits.

yea.. its so strange how perfectly reasonable people become loonies when it comes to politics! Best to stay away!

I have a strange need to vote for Romney right now after reading danlawsons comment:)

amy, as a faithful blog reader.. i've missed you!!! i hope you get settled soon, and get back to your frequent postings!!! (im hoping for more than once a day ;) )

As my friend just said, "Why do I get about 200 choices of cereal at Giant and only 2 for president?"

When I was in 3rd grade, our teacher asked us to find out who our parents were voting for for president, and then let her know.
Unbelieveable.
I think we should all vote for the candidate with the most skills, you know, nunchuck skills, computer hacking skills............