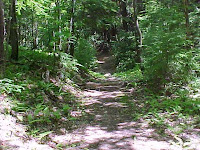 Happy Monday, everyone. I don't know about you, but I had a really excellent weekend. Which is funny, because my husband was away all day Saturday and all day Sunday at a conference.
Huh.
On Saturday afternoon I decided to take James on a nice little hike we have right here in town. You know, since the sun was shining and I had allowed him to watch 4 simultaneous hours of semi-violent Saturday morning cartoons, I thought my kid could use a little get up and go. Also, every now and again it feels good to be a true hero in the fight against childhood obesity--or at least remain neutral.
This is how I like to look at it: 4 year old boy + 4 hours of TV + cheetos and brownies for breakfast + 2 mile hike = neutral
Right?
Right.
This is also how I like to look at it: If I can get the kid to graduate from high school, always drive a stick shift, and never need to apply for The Biggest Loser, then in my mind, I'm a raging success of a Mother.
As you can see, we have strong values and very high expectations in the Lawson family--and I try to display subtle reminders of who we are all throughout the house. Like the picture of Jesus in our entryway, or the church magazine on our coffee table, or my cross-stitched wall hanging that says "A guy who drives a car with a standard transmission, has major sex appeal. A guy who drives an automatic might as well gift wrap his privates and mail them to Siberia. That's how badly he'll be needing them."
(Uh, yeah. That craft was a ton of work.)
Anywho, James loves this particular hike. We usually do it a two or three times a month. Since I get to maintain a somewhat outdoorsy image, James gets to pee off of the six-story fire tower at the top of the trail, and Gracie is allowed to poop 12-14 times in an hour, we're all happy. It's a win, win, win if I've ever seen one.
This time, on our way down the trail, we ran into a couple with a really funny looking dog--obviously a mutt. It was either a cross between a cocker spaniel and a donkey, or black lab and a My Little Pony--very hard to tell.

As James approached the weird looking animal, an overly cautious look came across his face. He looked up at the female owner and suspiciously asked, "What dog is dis?"

I believe he was asking for the breed, but since the dog obviously had none the owner happily replied, "This is Rufus."

The woman giggled because, you know, greyhound...heyground, it's beyond cute if you ask me (and if you disagree, it's probably because your private parts are East of Russia and you're all worked up and cranky about it).

Then, in all seriousness, James looked up at me, pointed toward Rufus--who was panting, wagging, and I swear he was smiling--and said, "Spway dat dog, Mommy. You gotta spway dat dog."

That's right. James wanted me to give old Rufus a blast with my pepper spray--just for being ugly.

As we continued down the trail, I explained to James that pepper spray is only to be used on very angry animals or real life bad guys--not an innocent dog who could benefit from a box of hair dye and a set of braces.

He still hasn't wrapped his mind around the concept.

My kids still say "wathclosh" to this day and I don't have the heart to correct them. Any chance you have enough spare time to whip up another cross stitch with identical saying? I have a space between a silk floral arrangement and the famous dogs playing poker print and I think it's just what has been missing;)

Ha ha ha ha ha...I thought he meant "spay" that dog...not that your 4-year-old would know what that means, but you never know.

Okay, I always read your blog but I don't think I've ever commented. I had to this time. The "cross between a cocker spaniel and a donkey, or black lab and a My Little Pony" had me laughing so hard that I was in tears. My husband wanted to know what was so funny so I tried to read it back to him and just couldn't get it out. Hilarious.

He'd probably want to spray me too. I can't even drive a stick shift.

I found you from navel gazing - I don't think I've ever commented. Your blog makes me laugh out loud every time I read it. Your child sounds adorable. Thanks for the laughs.

My kids grew up saying callapiter and I just didn't have the heart to fix it. Both kids did it. Having a daycare I heard everything. Lemelade (lemonade) hangaburger (hamburger) and tizza (pizza) just to name a few. I love it!

love the heyground name...remember when the kid at the park in Dallas thought Gracie was a tiger?!

A friend once suggested that if you can get through your kids' childhood without them eating poop, then you've succeeded.

As for poor Rufus. My dog is NOT a mix between a spaniel and a donkey. Actually, he was a quite handsome Blue heeler (before he got fat). But we've had kids ask thier fathers to shoot him because he looked fierce and scary. Now he's blind and really freaks out the kiddos.

I have never actually spit anything on my computer screen in my entire life until today, happily eating my FlavorIce, I came upon James wanting you to pepper spray that dog!