At Least it's a Soothing Color 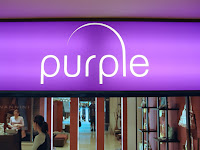 In case you're not aware, my husband is in the process of opening his own chiropractic practice--that's the reason behind the past few months of his stay-at-home-dadness. In an indirect way, I suppose it's also the reason that my child prefers to pee on upholstered furniture rather than the potty.
Lately, a number of people have been asking about the practice--particularly wondering when Jared will be open for business. Well, his practice is tentatively schedule to open on the 14th of Doptember.
Wait...what's that you say? Doptember is not a month?...Oh silly me, I meant to say the 14th of Never. Doptember, Never--they're easily confused as neither of them ever really happen.
In case you didn't catch my drift, opening a practice is far more involved than either of us ever imagined, we're doing our best, and it'll be open eventually. I've actually thought about replacing the "Coming Soon" sign in Jared's front window with a banner that reads, "We'll be open when we're open. Now back off!"
So far we've rented some space, the old walls have been torn down, the new walls have been put up, they've been painted a fine shade of lavender, and the flooring will be installed next week.
I wish I could put sound effects on this blog, because right in this spot, I would insert the sound of a record scratching. Like this...

Apparently color matching is more of an art than a science, and the clerk who mixed our contractor's paint should quit his day job and stick to other things--like field hockey. This guy managed to turn a chip of Benjamin Moore greyish-blue into a gallon of Valspar my-little-pony-purple.
When I walked into the office yesterday, I turned to the contractor with a hanging jaw and said, "Jim. This is lavender. What happened to the bluish gray?" He stomped out his cigarette, curiously scratched his stubbly chin with the side of index finger and replied, "I thought it looked purple, too. But then I held up the color chip, and it matched perfectly."
He held the Benjamin Moore paint chip to the Valspar wall and pointed back and forth between the two several times. I will admit that the two colors were in the same family, but claiming they match was like putting me next to a sixty-eight inch Asian girl and saying, "Wow. You two could be twins."
Jared hasn't seen it yet, but we're heading to the office around 10 o'clock this morning. I'm trying to convince him to wear some Depends because there are only two things that can happen when we walk into the space: Jared is either going to crap himself or linger in a shocked silence. If he manages not to poop his pants, at least the Depends will be a good conversation piece.
Posted by Amy

Please have the video camera ready in case J does doodie himself! That will provide terrific family entertainment!

Amy, you are always so funny!!

Hehe.. cant be that bad now!

Seriously--whay haven't you written a book? I always laugh so hard at your posts! You could be making a fortune!

And you're going to settle for the lavender??? I hope not. Let us know what happens!

You could rent it out as a go-go bar at night. Totally multi-purpose.

So - what was his reaction?

it would match his neighbors!