Topic of the day: Blog Trolls.

In the past, people have told me that the sign of making it big as a blogger is the involuntary adoption of a blog troll. In other words, the day some heckler starts leaving nasty anonymous comments on your blog, is the day you've become successful. I completely disagree--the day my blog troll came along was the day I developed a mild to moderate case of Irritable Bowel Syndrome.

If you're a long time post & comment reader of this blog, then you'll probably recall that I had quite a bit of trouble with an anonymous blog troll several months ago.

I would write about my child and he would say, "Get a life."

I would talk about visits with my parents and he would say, "You're a loser. You live with your mom and dad."

I would mention my marathon and he would comment, "No one cares about your stupid race. You suck."

And so on and so forth. Eventually--once I ran out of toilet paper and tears--I blocked anonymous comments and *voila* my heckler (and my stress-induced abdominal cramping) disappeared with a simple click of the mouse.

Last week I made a very short trip to Connecticut to attend my father's mid-week retirement party. I had Italian sausage, I had chicken wings, I had cake. I also had a shining moment of clarity when a portion of the blog troll mystery was unraveled. If you'd like to know the identity of one of my blog trolls, read on my friends, read on.

This guy was not the blog troll: 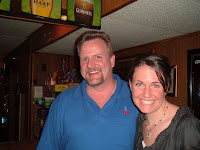 His name is Clark, he works with my Dad, and he's an avid reader. If I'm not mistaken, he also uses a blow-dryer on a day-to-day basis. His hair was flawless people. Flawless. How could I not post his picture, ya know?


This is my Uncle Roger (top and front view), and he was the infamous mystery troll: 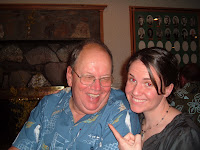 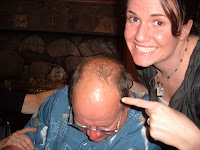 Some of the trolling was far too sophisticated for his doing, so I know there's another craptastic commenter or two floating around in cyber-space. But for now, a significant piece of the mystery is solved.

And since we're on the topic of inappropriate blog commenting, I'm going to have to use word verification again--at least for the time being. I've had way too many spammers trying to sell my readers discount gold, vacations to Asia, and penis enlarging products. Don't fall for 'em guys, they're totally fake.

And on that note, I hope you all have a great day troops! Yes, even you Uncle Roger.
Posted by Amy

I want to know why the real trolls don't have anything better to do! And sometimes the "spam" showing up on comments are actually viruses...why...I just don't get it. Do they get points for how many computers they crash? Inherent evil I guess, or is that a little harsh?

Clark's hair is almost as fabulous as his CNG shirt!

Wait? I'm not going to get my discount gold?

No Christmas Card for you, Uncle Roger. Uncles are such pointless relatives. They get to tease you mercilessly, but they never give you money. At least mine didn't.

And re: your suggestion on my last post - I'm considering it. Strongly.

It's hard to comment when your blog is just so brilliant and you have so many readers that inevitably what I want to say has already been said. *sigh* The vicissitudes of my life.

Also, thanks for making me feel better than the strong majority of my family has little to no contact with me.

I hope your uncle at least felt bad for causing your irritable bowel syndrome!

So both of your parents are retiring this year? Does that mean you'll have unlimited free babysitting, or will they be off cruising around the world on your inheritance? :-)

But I never would have gotten my cruise booked if it was not for that spam. Oh well...

Never thought it would be Roger... wow did you get Amy this time!!

What else does Uncle Roger do for fun? Torture puppies? Did he have a plan B for revenge if you didn't have a blog for him to leave nasty troll posts on? Why didn't he at least try to be funny? There are more questions here than answers- can you make Uncle Roger do a guest post?

I know I'm late to this... but I just last week had to finally remove my anonymous comments.
And the IBS?!? Hilarious... and sadly so true.