Every Mile a Memory

Life has been a whirlwind lately.

We're currently in the process of finalizing a town for Jared's practice, finding suitable office space, choosing a house, trying to secure a part-time gig for Jared, deciding whether or not to accept a job that's been offered to me, and gaining eight pounds. I'm still without a cell phone, I've completely run out of clean underwear, and come to think of it, I have no idea where my child is right now. I don't think I've seen him since Tuesday. I kind of miss the little guy.

In the midst of all of this chaos, the blog has fallen by the wayside, and I can't even remember which details I've shared with you about our recent move to New England. For example, did I tell you that I peed my pants laughing at a Blue Collar Comedy CD in Knoxville? Or did I write about Jared and I perfecting the Mockingbird song (think Dumb & Dumber, folks) by the time we hit West Virginia? Or wait--here's a good one--Did I already write about the fact that we paid big bucks to have our '89 Blazer shipped from Texas to Connecticut on a tractor-trailer truck? I don't think I did.

But now that I've shared those personal tidbits with you, I know exactly what you're thinking: Didn't it cost more to ship that Blazer than the car is actually worth?

Well, yes you stank-ass-smarty-pants, it did. If you want to nickle and dime it, my good old SUV is worth roughly sixty-eight dollars. But if you're more like me, and you measure the worth of goods in emotional memories, then my Blazer is priceless. In my last ten years--college, marriage, ten moves in four states, etc.--my car has been my constant, reliable companion. She's never left me stranded, and I love her more than I love my husband. Seriously.

When it came time to plan the move, Jared and I both understood that the Blazer would have a hard time making the voyage on its own merit, so we coughed up the cash and had it shipped.

When I dropped off the car at the shipping company, I slipped the guy a five dollar bill and whispered, "Merry Christmas. Try to put it on the top, okay? I don't want anything dripping onto its roof." He looked at me, he looked at the car, and then he looked back at me. "They'll never let me do that," he said. "We put the nice cars on top. But thanks for the tip."

And then, as I held back my offended tears, the guy said, "Walk around the car with me. We have to make a note of every dent, ding, and scratch on the body of the vehicle." So off we went, stepping slowly, as he scribbled, and noted, and drew in his notebook. Twenty minutes later, he ripped off the carbon copy, handed it to me and asked, "Did I miss anything?"

Here is a photo of the actual carbon copy: 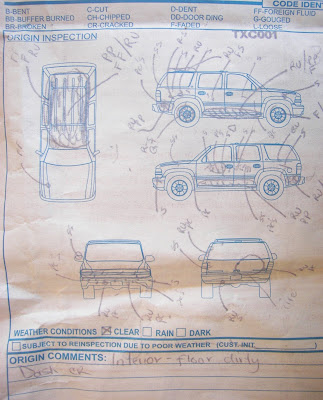 Sweet wheels, huh? Check it out, he colored in the entire roof!

The Blazer arrived yesterday, and I'm pleased to report that there are no new dents, dings, or scratches. It looks just as crappy as it did in Dallas, and I'm so glad that it's home.
Posted by Amy

I can understand that.. a car is worth infinitely more than the four wheels! Glad she got there safe and sound!

HOly crap. That drawing says it all. Funny stuff.

And what's with this business of your blog falling to the wayside? I thought we were more important than that.

So you say the Blazer's worth roughly $68.00 - is that with or without a tank of gas? (sorry, couldn't resist)

That is an awesome picture. I'm glad you've been reunited with your car.

I love how it says your interior floor was dirty! That man was all about ratting you out.

Sarah and I were wondering if you guys were towing your car behind the rental truck or what. When I said maybe you'd sold it, she got apoplectic! She said something like, "Mom, you have NO IDEA how much Amy loves that car. She would never get rid of it!" Boy, did she have you pegged.

Ahhh...the romance between a girl and her faithful chariot! I'm glad it made it back safely.

P.S: Is James' fro back? I hope you've hidden all the combs!

I've only had two cars in my life so far (then again, I'm only 21). And I'm sorry to say that I did not hold such a loving endearment for my first hunk o' junk.

Glad to hear your car made it safely home!!

"dirty floors, dash cracked". oh my lord, this is the funniest thing ever. I can't see the code for "RU", but I'm assuming that means "rust"... and a whole hell of a lot of it to boot!

Aside from all that you have going on right now, how is the Christmas letter coming along? I can't believe I haven't received mine yet, I'm starting to get depressed about that situation. Don't deprive me any longer!!

You should frame that!!

I'm so glad you took a picture and shared it! Good work!

My car, The Green Hornet, is similiar in condition and sentimental value. It looks pretty ghetto at this point, but I'm gonna drive it until it leaves me stranded on the highway. That's why God invented cell phones.

Amy, It is me Claire Stowell on the other coast! I love your blog. I have been told you are funny on the BLOG, but they did not warn me to take a potty break before I read it! I practically peed my pants reading it!!!! You are great. Hope all is well in the East. We are settled into the West well and love it. Keep in touch!