I spent the night tossing and turning, and when I did doze off for a minute or two, I was dreaming about A) snakes, or B) the teenagers I teach from church. Now don't get me wrong, I love these teenagers madly, but I see them in my living room every morning at 6 o'clock, we really don't need to frolic in my dreams.

So when the alarm went off at 5, and I rolled out of bed, I was feeling much less than fresh. I was jealous that Jared was still sleeping, I was annoyed that Tuesdays are work days, I was beyond frustrated when I heard Maggie fuss, and I kind of felt like throwing a cinder block--you know, just because.

After seminary was over and the kids filed out, Jared rolled out of bed. He walked down the hall yawning, stretching his arms over his head and let out a sleepy, but happy good morning.

Instead of a hug and a kiss, or a Hey J, or a smile and a wave, I laid right into him. "Remember how you crapped on me for never picking up after myself?" I prodded, "Well you made popcorn last night and didn't pick up any of it."

And then, still feeling pretty combative, I launched into a dramatic soliloquy about our evil bills and their impending, fiery due dates.

Hey you over there. Yeah you. The one who's my loyal husband and the devoted father to our kids. Come over her so I can CRAP ON YOUR HEAD.


Quite seriously, there are days when I'm embarrassed to be myself. I can't even muster up the energy to make excuses for myself--I just suck.

Last night, I rocked both of my kids before bed, and I'm not even kidding when I tell you that we sang along to a song called I'm Trying to be Like Jesus. You know--kind, patient, loving, understanding, helpful, self-controlled, forgiving, and one million other fabulous characteristics.

Then this morning I was all, "Hey kids, watch this! Mommy will now show you the opposite of being like Jesus. And she will use your father as a prop!"

The bottom line is: I AM SUCH A BLOW HOLE.

And there's an addendum to the bottom line: Even if your car is being repossessed while your dog falls into a pit of quick sand, and your jello mold cracks down the middle while a 2,000 pound bag of rocks falls onto your newly re-shingled roof, BEING CRAPPY TO YOUR SPOUSE WON'T HELP ANY OF IT.

So today, right now, I'm recommitting to live a life that's more like the life of Jesus--especially in my dealings with Jared.

1) We will start by having fishes for dinner tonight. I have a whole bag of frozen fishes from Trader Joe's, so this line item works particularly well.
2) I'll remember that Jared's doing his very best.
3) I won't raise my voice or push his crap around unless he's selling discounted iPads at the Temple--which I've never seen him do.
4) I'll stop being selfish and greedy and stingy--because if I'm being straight up honest, I'd LOVE to roll around naked in a big pile of $50 bills.
5) I'll be a team player, because somewhere in the scriptures I think it says something about a house divided collapses on your head, and believe me that is the LAST thing we need right now.
6) If I feel like being wretched, I'll say some prayers and hope it changes my mind.
7) If it doesn't change my mind, I'll remember that Jesus wasn't wretched.
8) I'll do some extra service for Jared--like fold his laundry or clean his shotgun.
9) I won't pick on him for things I'm equally bad, or worse at.
10) I'll just be nicer.

I'll probably skip the part where I preach to him and call him to repentance. Actually, I've been doing that for a while, and it's not effective.

Are you wretched sometimes, too? Any other tips for being less of a nagging old hag, and more of a helpful loving wife? I could use 'em.
Posted by Amy 20 comments:

A Straight Up Day Maker

September 16, 2011
On Wednesday, a nice man with a camera showed up to my stroller fitness class, which had a lot of the moms buzzing...Is he a pervert?...Is he a creep?
I had to tell them no, and I was very sorry to disappoint--because we all know how much a group of sixteen women loooove a slice of drama on a weekday morning. He was a local newspaper reporter, and he was nice enough to come take a few pictures of the class I was teaching.
When he introduced himself, the first thing I said--and this is absolutely not a joke--was, "Joe, I'm wearing spandex. If a butt shot makes it into the paper, it's gotta be flattering." He nodded and said he wasn't sure the pictures would make it into the paper at all. Fair enough.
This morning I signed onto the newspaper's website, and the stroller pictures were the first thing to pop up on my screen. Holy excitement! Then I found out that the pictures had also made it to the front page of the actual paper--you know, the version that nobody reads anymore?! Holy more excitement!
I had Jared buy two copies from the grocery store, and I was thrilled to see that while I was under the very important story about toilets and bleachers (big news in these parts), I was above the story about the Governor: 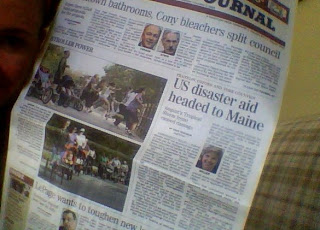 After looking at the article, I noticed that I'm inadvertently wearing the same headband and shirt that I was wearing when the pictures were taken on Wednesday. It could be a silly coincidence, or it could be the fact that I wear this shirt every time I'm not wearing my blue sweater (the headband matches both outfits).

Also, I'm not positive that I've washed the shirt since Wednesday. Let's assume that I have.

September 8, 2011
Check it out. We had professional family pictures taken: 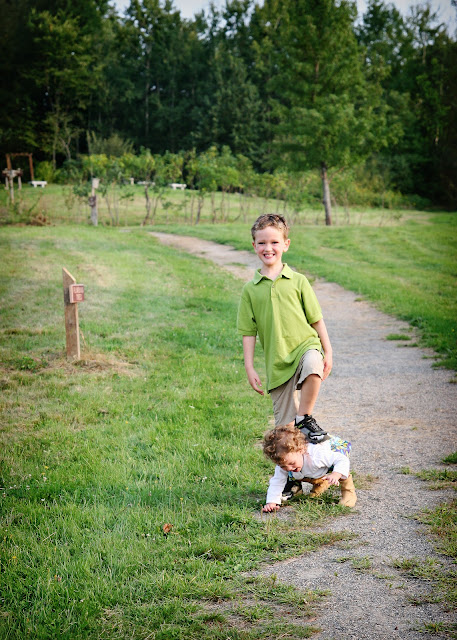 Um, der. Of course I wore the blue sweater: 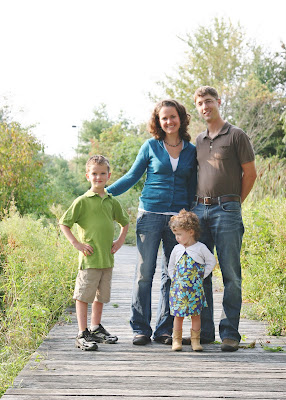 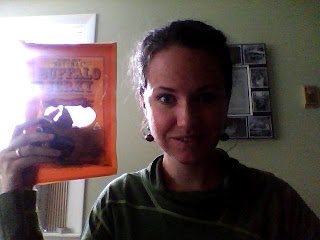 I tried to post this yesterday, I swear I did. But my internet connection is just about as reliable as my diet plans.

I live in a town without a stop light. Well, we actually have one blinking light--but the whole red, yellow, green thing? Not so much. There's a total of nine towns in our region, and if you add 'em all up, we have one stop light between all of us.

Honestly, I'm not sure if the no stop light thing makes me more average or more unique than most Americans, but usually when my non-neighbors hear about my state of living, they're all "Whaaaaaa? You don't have intersections???"

Now I shouldn't paint a picture that we live in a homemade log cabin in the middle of the wilderness. We're actually within fifteen miles of a Target and a TJ Maxx--and you totally go through a stoplight to get there. But a mall? I don't know, I think the closest mall is about seventy-five miles down the only highway in the state. And now that I think about it, I haven't been inside any mall since early 2009.

I totally, completely understand how this could feel confining to people, but for me, it's a total perfect fit. If anything, I'd like to live a little farther from town--maybe get some animals, and a milking pail, and a field full of dandelions, and giant boobs. (Giant boobs are awesomely appropriate for city or county living.)

Here's one example why: 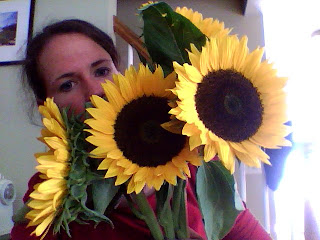 Organic Sunflowers--not that I'm planning to chew and swallow these flowers, but organic farming is better for the environment no matter what you're growing. So seriously, how much do you think Whole Foods would charge for four organic sunflowers that are bigger than my [freakishly ginormous] head? I'm thinking $12 maybe? $13.99?

Well, up here in the middle of Maine, I paid fifty cents a piece. FIFTY CENTS A PIECE! I bought them from an unmanned bucket on the side of the road and put my money in a yogurt container. I love that. It's just so stinkin' sweet. And someday, when I find out that my kid dared someone to steal all the money from the yogurt container so they could buy thirteen Snickers at the gas station, I'll kill him.
Posted by Amy 8 comments:

September 1, 2011
Okay, so maybe the blue sweater is a little bit boring. But wait, it gets better. I bought it two Thursdays ago at Target, and so far, I've worn it ten out of the last fourteen days: 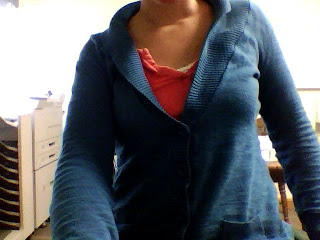 That's not a joke, that's not an exaggeration. Even Jared, the man who doesn't know the difference between the green and yellow Crayola crayons noticed the serial sweater-wearing. The man still can't wrap his mind around what makes a skirt a skirt and a dress a dress, but he knows that the blue sweater has gotten completely out of hand.