Things that Piss Us Off Thursday: Volume Something

Wow, I need this like a fish needs frigging water. So, without further ado, here's what's pissing me off today (and maybe for the last month):

1) When things get overly complicated within groups of people. In other words, drama. Ech. I even hate just typing that work.

2) Crappy snow at the end of January. In the Lawson family, we're all happier when we can ski a little.

3) Solicitations for who-knows-what on my work phone line. I actually feel a mini adrenaline rush when I hang up on them.

5) The fact that I'm too lazy to call about the super slow internet with really spotty wireless.

There, that felt good. Now it's your turn.

Right now, I'm sitting on a pile of mats in the brand new studio thinking to myself, "Wow, what just happened?"

And I guarentee you that Jared's sitting at home, in his recliner thinking, "Wow, where the hell is she? We need to watch some Pawn Stars on Netflix."

In case you didn't pick up on it in the pictures down there, the new studio is right next door to Jared's four-year-old chiropractic office. So far, I can't lie, the getting-used-to-it phase has been kind of tough. I've essentially edged in on a part of his life that used to be just his.

Our kids are in and out of his office more than they ever used to be--and by that, I mean, that James does laps through the treatment area on his scooter since the spaces connect in the front and in the back.

We've had approximately one million squabbles over lost staplers, messy bathrooms (we share 'em), walking in on each others' clients, a misplaced broom...you get it.

I just hope it all evens out.

I also want him to pay for my window washing, because I think that would be super sweet.

I honestly, with every fiber of my being think it will turn into that, but for now, we're ironing out our growing pains. I hate growing pains.

This might sound silly--and I'm sorry, you're probably thinking WOMAN, CAN YOU TALK ABOUT SOMETHING ELSE?--but I can't believe this is happening. I love what I'm doing so so much, and honestly, I've never even felt adequate at a job before. So to come in here and have the chance to do a good job every single day? I love it so much.

I feel like it's kind of stupid to say something like, "This is what God wants me to do." Because a) With the exception of prostitution, does God really care what I do to make a buck? and b) Why would God care about exercise?

But you know what? I've never felt so guided in my life. Other than getting married and deciding to have kids, I've rarely felt like God was guiding me in any direction all. I've always felt like he was all, "They're all good ideas, Amy. Do what you want, my blessed child."

This time, it's different. Because it feels like I'm supposed to be helping people learn how to do a nice squat. And I've learned that God does care about what I do, and I really think God likes exercise, too.

And as a side note, if I had to guess, Jesus Christ was probably a runner. Possibly a swimmer, but DEFINITELY not a power lifter, just sayin'.

When it comes to religion, I know I'm usually not much more than the Mormon who likes to swear. But go ahead, now you can add 'the Mormon who thinks Heavenly Father is doing some one-legged toe raises under than flowing robe thingy.' Because HE IS.

I'm hoping beyond hope that this all works out. That Kennebec Valley Coaching can put some food in our bellies, and make people in Central Maine healthier and happier.


Yesterday, I was driving to get Maggie and I saw a runner coming toward me on the side of the road. She looked lean, and strong, and fast. And when I got closer, I realized she was a Kennebec Valley Coacher. She joined the Couch to 5k group last summer, and now she's out of a six-miler on a random winter day.

It made me cry.

So thanks for the patience these last few months. I hope I can write here more often these days. And I promise, it won't just be about the business venture.

Although I did minorly pee in my pants tonight during a tough round of squat jumps.

Happens to the best of us.

Thanks.
Posted by Amy 11 comments:

And while we're on the subject of Kennebec Valley Coaching...

If you're on facebook, and you're looking for a little bit of motivation to improve your diet and exercise situations, check this out: 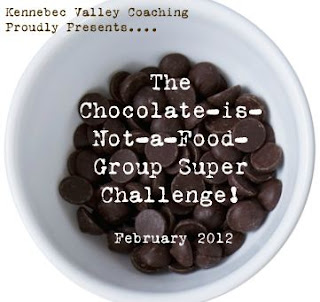 There are 2 different parts to the challenge. You can try for 1, or try for both.

The 2nd option is the exercise option. We're aiming for 20 minutes a day, every day in February.

Everyone will set a motivator to help get them through the month. Maybe buy a cute, new dress that's a leeetle bit tight. Schedule a boudoir photo shoot for yourself. Buy a new belt to keep you motivated. Shoot to run a 5k race. You get the idea.

At the end, we'll pick a winner from each category.

The last challenge was super fun. One winner ran over 150 miles between Thanksgiving and January, and the other winner lost 9 pounds.

That could be you! And all it takes is a little online fitness challenge...

I Swear I Have a Good Excuse

I know. It's been six weeks. I swear I've been really busy. 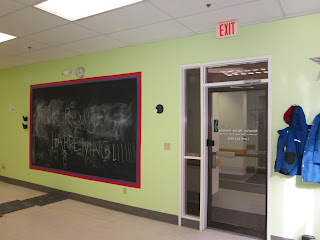 The greatest ginormous chalk board in all of Central Maine. 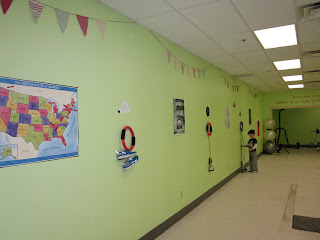 A map to represent some of the far away Kennebec Valley Coachers. I still have four spots open for individual coachees if anyone's interested. $5/month blog reader discount! 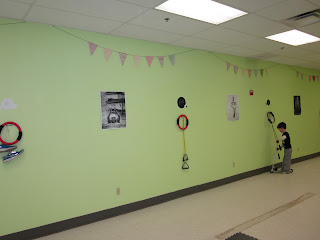 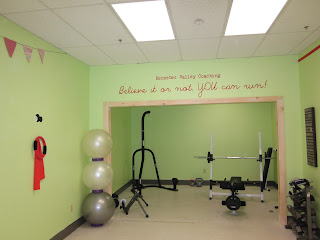 You can have James if you'll come paint that trim for me. No, not joking. 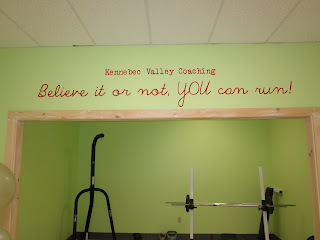 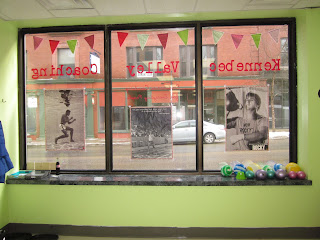 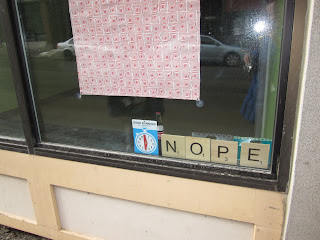 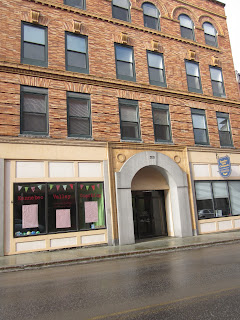 Studio on the right, Jared's chiropractic office on the left. So far so good...only four screamfests over office supplies! 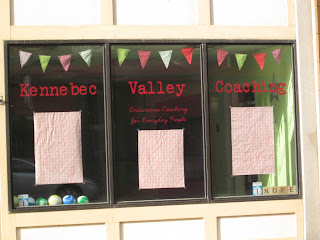 It's says 'Endurance Coaching for Everyday People.'
It's a group training studio. Running goups, triathlon classes, pilates, boot camps, aerobics, you name it. A work in progress, and I'm in love. If you want to stalk more closely, you can 'like' Kennebec Valley Coaching on facebook.
Posted by Amy 9 comments: