Jesus had an earring. No really, He did.

April 25, 2011
Everyone knows that yesterday was Easter, and as such, we spent a lot of time talking about Jesus in our house. You know, "We're trying to be like Jesus," and "Jesus loved the little children," and "Jesus came to me in a dream and told me the last piece of pie always goes to Moms." The regular sort of stuff.
But I've to to say, amongst all the normalcy, there was something very, very strange going on. Every time I'd mention Jesus, or Easter, or The Savior of the World, James would mention something about getting an earring. In his right ear.
Errrr?
Conversations like this...
ME: Remember James, it's not all about the bunny, it's about Jesus.
JAMES: I know, Mom. I'll get an earring to be like him. In my right ear.
And this...
ME: Christ the Lord is risen today!!!!
JAMES: So I will get an earring to be more like Jesus! In my right ear!
Finally I was like, "Listen kid, I don't know where this is coming from, and really, it's fine. Just don't mention it in front of your Grampy. He'll faint."
This morning, while I was sifting through James's Easter haul (organizing, not skimming off the top...), I came across this picture of Jesus. He probably got it from Primary--the kids' Sunday School program at church: 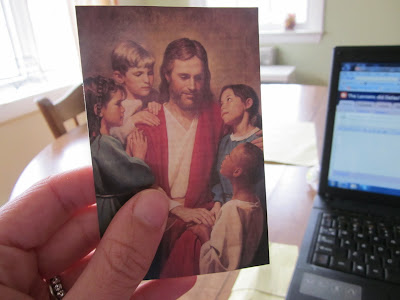 Then I looked a little bit closer: 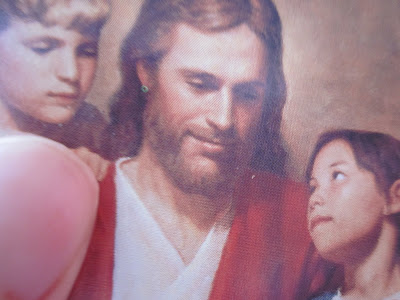 Call it a printing error, or call it a miracle. Some people see the Holy Mother Mary in the bread of their grilled cheese sandwich. As for the Lawsons? We see Jesus with an earring. In his right ear. Or both ears. The world might never know.
Posted by Amy 14 comments:

Now that our taxes are signed, sealed, and delivered, I can blog again! I can also find friendly words to use toward my husband, and in my opinion, that's even better. But wait.......on top of that, I can have my choice of beans, rice, or oatmeal for every one of my meals for the next three months! Woo hoo for taxes!

In honor of the fact that Jared and I didn't keel over from stress before/on/around April 15th, we took a trip to see the Boston Marathon yesterday. What can I say? If you can't join 'em, watch 'em. I'm so glad I did, it was incredible.

We lined the fence somewhere around mile 25.5, and I've got pictures to prove it: 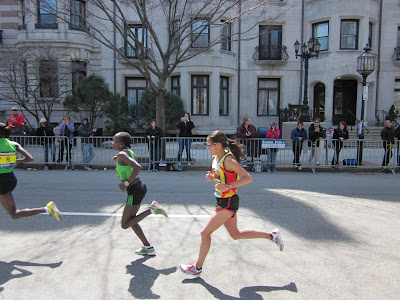 This was the first pack of women to come by. I kid you not, they were like three feet tall and probably weighed sixty-four pounds with a load in their pants. When they passed up, they were at 2:18. The elite women got an early start, and I've got to say, it was pretty inspiring to get to see the women pass first. 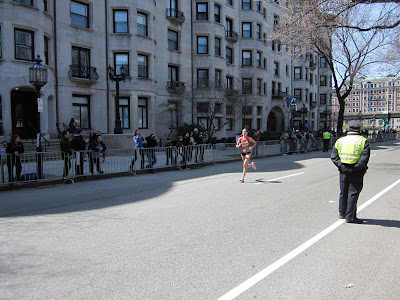 Speaking of inspiring, that's Kara Goucher up there. I love her so damn much that the magnitude of my girl crush alone almost propelled me over the fence and into her arms. When she ran by I was like, "Kara! It's me! Amy! Your best friend! Remember?!"
She didn't seem to remember. Huh. 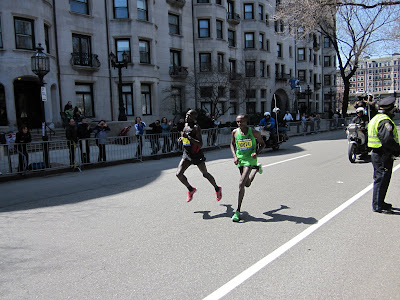 The guy in the green ran something insane like a 2:03--that's 4:41 per mile. Look at the guy on the left. He's just boinging down the road like a kid on Christmas morning. When they ran by, I think I yelled something like, "Holy @#$%!" 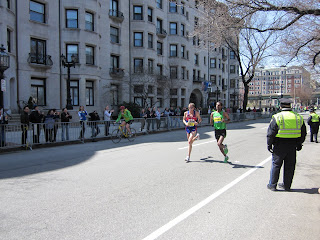 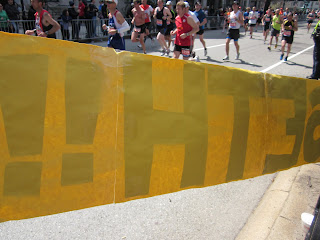 And finally, here's the back of the sign that Jared and I brought along for our friend, Seth who was after the elusive sub-three hour marathon. Hoo boy, I'm not sure I've ever seen anyone hit the wall so hard--oh wait, right.

Poor guy was walking along the opposite side of the road, spotted the sign, and made his way toward it like a moth to the light. Runners (possibly dressed up like ballerinas and apes) were bouncing right off of him while he zombied over toward the sign. He was like, "Oh look. That's my name."

He leaned on the fence and I said, "Do you want me to take your picture?"

It wasn't a good day for everyone, but it was a great day for us. A 100% kid free trip to Boston. We even held hands.
Posted by Amy 17 comments:

Your Good Deed for the Day

Are you a prayer ninja? A good thought thinker? Maybe you're a postive vibe sender?

If you're any of the above, I'm asking you to go visit this blog, and then hope your guts out for this little family who's experiencing such a living nightmare right now.

Nathan, the dad, is a friend of a friend, and I just can't get these people out of my mind. Please, please, please visit their site, leave a positive comment, and follow their blog. They really need to know that people from all over the world are supporting them while their baby (that's right, I said baby) is battling leukemia.

Plus, I'm pretty jealous of Sadie's hair. I mean c'mon, aren't you?!
Posted by Amy 6 comments:

No Seriously, FML (Fart on My Life)

If you haven't been to the old blog in a while, I'd ask you to start by reading yesterday's post titled Fart on My Life. If you're already familiar with that post, then mmm mmm mmm, you're in for a treat.

There's good news and there's bad news, and just for the sake of keeping things exciting, I'll start with the good news.

GOOD NEWS: Thanks to a strapping combination of testosterone, persistence, and brute force, my ultra manly husband was just barely able to stretch the shrunken cover back on to the couch cushion. Yay! Go Jared!

BAD NEWS: The bad news is, well, they do say that a picture is worth a thousand words... 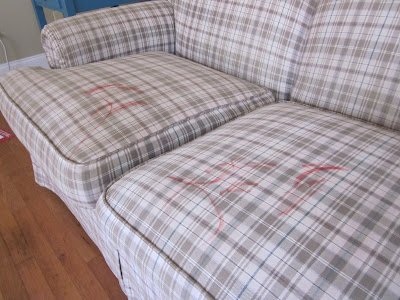 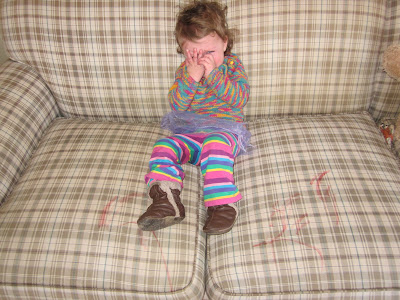 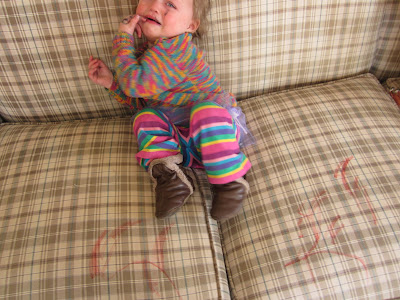 Fern Maggie Lawson, Artist
F to the M to the L.
Posted by Amy 24 comments:

I've been doing the same job for three years, and for those last three years, I've had a fairly consistent meeting schedule. Every first and third Tuesday of the month, I have a committee meeting at seven o'clock in the morning. So, according to my calculations, I just attended my seventy-second early morning meeting.

Needless to say, I'm completely used to this schedule. So used to it, that if I'm ever taken hostage, the second thing I'll probably say is, "We're gonna need to settle this out before my executive committee meeting next Tuesday morning." You know, right after I say, "If you don't buy me a box of ice cream sandwiches on the way to your secret cave, you have no idea how much you'll regret picking me."

Jared on the other hand, he's jusssssssst, getting used to this arrangement. I don't blame him. Some times it takes me three-thousand reminders and seventy-something dry runs to let something settle in, too. Like losing five pounds--pretty sure I'm on try number ninety.

Yesterday was one of my meeting days, and Jared was so incredibly proud of himself for not scheduling any early morning patients. He got a sticker and a rub on the head for his remembering skills. Unfortunately for him, my meeting ran late, and even though his remembering skills were a force to be reckoned with, his spur of the moment problem solving skills weren't ready to cope with a situation of such magnitude.

I pulled in to the driveway to find a stunned/confused looking husband, and two crying kids. The kids were crying because they were hungry, and Jared, well, Jared always looks a little turned around: 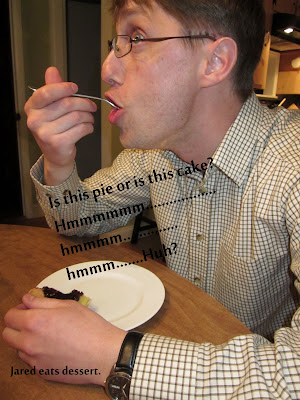 "The kids haven't eaten," he replied.

This question was answered with a blank stare, a shrug of the shoulders, and a sincere, "I don't know."

This time he looked down at his feet.

"You didn't pack a lunch? What have you been up to for the last half hour?"

"I don't know," which again, was sincere. "I guess I was just standing here, wondering if you'd get home in time to make my lunch for me."

I love him, I swear I do.
Posted by Amy 5 comments:

Fart on My Life*

Lately I've been seeing the same three letters all over the internet, and up until three days ago, I had no idea what they meant. The letters? FML.Honestly, when I see the letters FManything, I automatically assume it means For More Somethingorother. So this FML thing? I just couldn't figure it out...

So finally, after three-dozen completely stupid stabs at the whole FML thing, I decided to ask for Google's help.

Ten or so minutes after my FML discovery, I really started to ponder the term. "Man," I thought, "who would write that?" And, "I think I'm really grateful for my life. No, actually, I LOVE my life! I would never write those three letters!"

And then Saturday happened. A day that can only be summed up by a certain three letters. F to the M to the L. 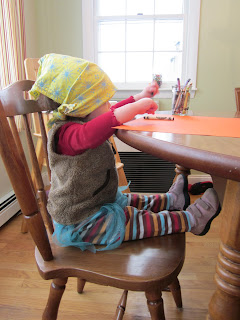 (But holy crapness, how cute is she?) 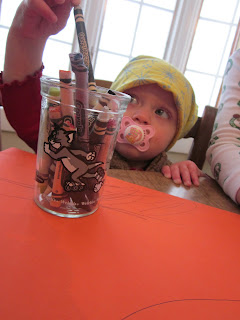 (So cute it makes me want to pass gas.)
As you can clearly gather from those pictures, Maggie loves to color. Actually, it's more like this: Maggie LOVES TO COLOR! Which is funny, because James would rather walk ten miles with a burning cigarette in his shoe that color for four minutes. Their personalities are so extremely different, but I'm almost 97% sure that they have the same father. Isn't it crazy how that works?

Before I move on, here's another smidge of proof that Maggie LOVES TO COLOR!!!!!!! 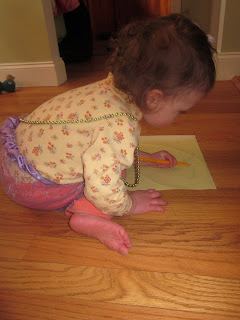 (Holy stinkin' cuteness overload!)﻿
Okay, so just to review, by this point you should know two things:
1) ﻿Maggie loves to color, and
2) Maggie has a cute problem.
On Saturday morning, I walked into the living room, and to my horror, I found Maggie coloring all over the middle couch cushion....WITH LIPSTICK!!!!! Not only do I not use lipstick ever (it came from one of those damn-freaking Clinique free gift bags), but my parents just gave us that couch three years ago, after they used it for ten years and got sick of it, and I happen to think it's very nice, probably the nicest piece of furniture we own--you know, in a plaid kind of way.
I immediately ran to my computer, searched for something to the tune of HOW IN THE HELL AM I SUPPOSED TO GET RID OF LIPSTICK ON MY COUCH? I TOTALLY SUCK AT LAUNDRY!, and moved into action. I peeled the cover off of the cushion, doused it with goo gone, and carried the whole wet mess down to the laundry room.
I flipped up the lid to the washing machine (because I probably won't get a front loader until my parents get one, use it for ten years, get sick of it, and give it to us), and noticed washing directions for all kinds of stains. Believe it or not, there was even special directions for how to launder items that were soiled with cosmetics. Turns out, you should wash those kinds of things on hot.
So I did. I washed the cover to my couch cushion on hot.
Enter the three letters I sincerely hate to love: FML.
That's right, I took that lipstick covered couch cushion cover, and I shrunk the hell out of it. Actually, I shrunk that cover so good, that I haven't been able to squeeze it back on to the cushion. Hopefully no one will notice the difference. Honestly, is it obvious? 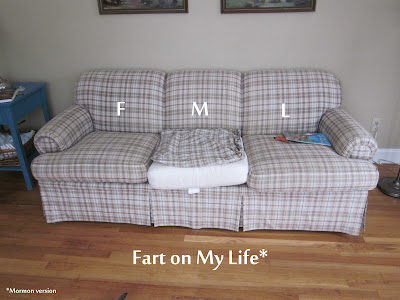