Amy
Well, that's me. I'm Amy Lawson, I'm 29 years old, and I live in Maine. Having been raised in Connecticut, I'm a New Englander through and through. Sure I lived in Texas for a three year stint, but that only confirmed the fact that I can't handle a place where people use purses that cost more than $17

I've been married to Jared for almost 8 years, and we're really very happy--but I will admit that we have a spirited marriage. You know how some parents who have horrible, crappy kids like to say things like, "He's very bored in school"? Well, "spirited" is my way of telling the world that we argue from time to time. But we love each other madly, and I feel very confident that we'll be pissing each other off or the next fifty or sixty years.

I work part-time, from home, and I get paid pretty well to do it. And no, it's not an internet scam, I have a real job, for a real organization, and actually, it's so real that I never talk about it on this blog. People like to guess what I do, but they'll never figure it out. I mean really, how would they? I don't even know what I do.

I'm a runner. I kind of hate it, but I can't stop. I've been doing it for sixteen years, and as much as it sucks, I just keep plugging away. This year I'm trying like hell to qualify for The Boston Marathon. I honestly think I can do it.

I absolutely hate laundry and always have piles of unfolded, clean clothes that go up to my waist.

I love to cook. My biggest talent in life is the insane ability to make a kickasstic* meal out of nothing. I like to sew here and there, I like to blog, I'm addicted to facebook, and I like day trips and random drives more than almost anything. 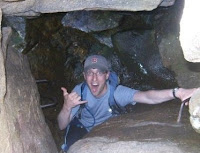 Jared
Jared is my husband, and somehow, he keeps getting hotter with age. The thirties have been very, very kind to this man. He's a chiropractor and owns his own practice. Sounds very fancy and impressive, but I'll tell you a little secret--he's the one who cleans the toilets. He's also the one who pays my student loans, so he's rolling along.

Jared is super outdoorsy. Actual, that's how I roped him in back in 2001--I pretended to be outdoorsy, too. I'm not, and I broke the news to him the minute we returned from our honeymoon. Haven't been camping with him since. The man loves to fly fish. He'll tell you about trout until your eyes roll back in your head. But you know what? Trout make his heart sing, and not enough people have a heart song these days. 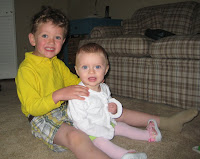 James
James is five. He's always been in the 95th percentile for height and weight, so he actually looks more like a third grader with horrible motor skills. We blame it on the fact that he was born in Texas--everything's bigger in Texas. He loves all things superhero, he likes to swim with a crab shaped tube, and he's a huge fan of his baby sister.

Maggie
Maggie was born in October 2009, and oh my word, she's the cutest baby I've ever seen. She's the second child, so I've only taken seven pictures to prove it. She's also has no baby book. Maggie's in the 95th percentile for height and the 40th for weight--my little linguine. 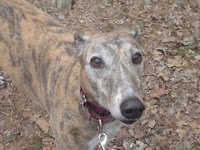 Gracie
Gracie is a rescued greyhound. She'll be eleven in November. She gets up off her pillow three times a day--twice to eat and once to stick her head in the trash. She has a constant leak of horrible gas. I know she can't help it, but I hate the way it burns my eyes.

*I'm proud of that word, I made it up all by myself. I guess you can use it, but when it hits the mainstream, I want it to be attributed to me.