This has got to be my favorite picture on all of Facebook. This, ladies and gentlemen, is a photo of my first grade class back in 1986: 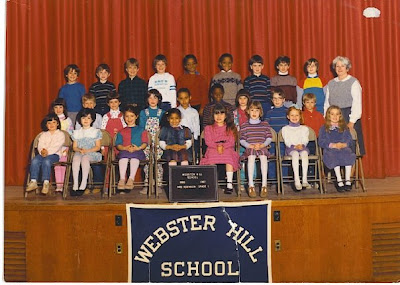 Darn that was a good year.

I was five years old, losing teeth left and right, and looking back, it seems as though I was just embarking upon my awkward phase--you know, the one that lasted until my twenty-third birthday?

So, can you find me in there? Really, can you?

Now if you look at the child in the very center of the middle row, that's Frank. Frank was loud, wiggly, and had a most excellent sense of humor--everyone thought so. Well, everyone except our teacher. Even at the ripe old age of five, I could tell, beyond a shadow of a doubt, that Mrs. P didn't care much for underarm farts, or knock-knock jokes, or the Frankie package in general.

But man, that kid was just my style. I always pulled some first grade strings to make sure that we were assigned to the same lunch table--he liked the treats my mother would pack for my table-of-four, and I liked the punch he packed when he tooted. Yin and Yang people, Yin and Yang.

One afternoon, as we were busily working away on dot-to-dot puzzles, I remember hearing our teacher say, "Frankie, if you move one more time, I'm tying you to that chair. I mean it." And before she even had the chance to wag a finger, Frank was up, using our in-class water fountain.

Whoa guys, apparently Mrs. P wasn't one for issuing empty threats. Within sixteen seconds, Frank was sitting in the middle of the classroom, tied--loosely and lovingly, of course--to his little blue plastic chair with a single strand of kite string.

And with that cue, every single child in the class proceeded to use the water fountain over, and over, and over again because, du-uh!!! If Frankie was tied to his chair, it had to be fun. We wanted to be tied up, too.

And that was '86. No lawsuits involved.

So really. Can you find me?
Posted by Amy

are you the kid with short hair in the pink overalls?

right next to Frankie....greenish shirt and overalls?

I know where you are! You use to rock that awesome outfit!

First row, third from the left?? Second row, very left? I need to see it bigger and clearer. ;)

I second the blue green shirt and overalls.

Either the overalls or the 3rd over from the left on the front row.

I saw first girl on the first row, looks like a little James! I hope I'm right, because i'd hate to be wrong on this one.

At first I was thinking the green shirt and flowery overalls right next to Frankie. Then I decided you had to be the disarmingly cute girl in the front row decked out in tights and light blue dress.

yeah. I'd kill for some rope right now. Of course, then the students would stay in my room until I untied them. You see my conundrum, don't you?

I'm guessing second row, girl in the blue shirt and multi-colored overalls. If not, then you have to be the girl right next to her in the red overalls. Right? And I love your reasons for being fond of Frankie! Great toots!

Good times:) I'm out of the game because I know the answer...and boy it seems like only yesterday! It's like I was just washing those clothes.

ok, I cheated and checked it out on FB, can't believe I got it wrong!

Oh, Runner Susan...I was graduating COLLEGE in '86. So this post just made me cry.

yes, I'm having a hard time coming to grips with the fact that I was in high school when you were in kindergarten. Man, I'm old (but I've still got it, so I'm feeling ok)

i think you're the one in the striped purple dress in the front row, on the right

I used to live right down the street from that school... who knew! (well, ok I knew.)