Score One for Team Jared 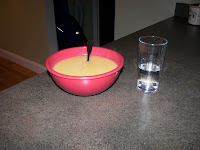 Jared got home approximately six minutes ago and that man has had nothing but not-nice things to say about by homemaking tendencies since the moment he stepped through the door.

I swear, if I had the option, there are days where I'd return my husband to Big Lots for nothing but a store credit.

I made him dinner--homemade sweet potato soup, pictured above--and I was like, "Say nothing about the salad bowl, Jared. Don't say a thing."

And do you know what he did? He said it. Of course he said it. He was all, "Why's my soup in a gigantic salad bowl, woman?!"

To which I calmly replied, "It's in a salad bowl for two reasons. First, all of the soup bowls are dirty, and second, I'm not convinced that I love you enough to wash one."

In response, Jared decided to kick it up a notch and hit me where it really hurts--the laundry department. He reached into his back pocket, pulled out a very crumpled receipt and said, "Do you have any idea when this receipt is from?"

I remained silent, offering nothing but my patented biz-natch glare as an answer.

(I'm very sorry to say that I'm not making that up.)

At that point, Jared gave me a super disgusted look and goes, "You went to see Flubber when you were in high school? What were the cool kids doing?"

(...in case you missed it, there's another new post down there)
Posted by Amy

I just got home and saw this. I was thinking Jared...don't say it, don't say it.....about the salad BOWL....lucky she didn't flush it in the toilet BOWL! But it was the word "Flubber" that just made me get saliva on my keyboard. I have to sanitize it now. How was the rest of your day? Good luck for a nice evening Jared!

Let us know if Jared enjoys his night sleeping on the couch. That would be TWO points for you!

I think you do your laundry too often. Really his jeans are good for another 6 months.

My question is: Does Jared pull his jeans out of the hamper to wear? Or does he expect you to put them there, then launder them later?

Cuz any guy who can't locate the hamper does NOT get to complain about soup in a salad bowl.

Oh Amy can you ever post an acurate description of one of our little altercations. To all, don't believe a word she says. And I do ALL of my own and James laundry.

This is the part where Jared should feel very VERY thankful - because I didn't even know that salad and soup bowls were different.

Plus my husband does all of the laundry, every stitch of it. For six people.

How much does HIS life suck?!!

Hee hee, laundry is my NEMESIS. I HATE IT! I do wash it every single day, therefore my piles of laundry are CLEAN but still, the pile is as tall as my husband. It's a tragedy. Really.

Wait, Sue... your HUSBAND does ALL the laundry??? Good grief, are you sitting around all day, watching Soaps? I'm SO jealous!

hi.. just dropping by here... have a nice day! http://kantahanan.blogspot.com/

Jared is getting good with the come backs. Impressive.

At least you're making him dinner. Right now Dan has to fend for himself. Poor guy, he's skinny enough as it is.