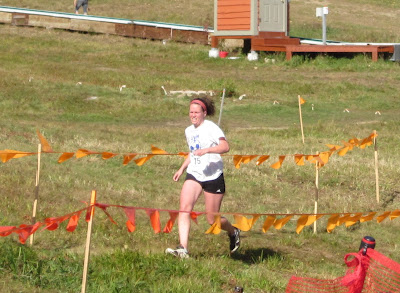 Well, it's a decent picture in my world.
It was a four mile race. Two miles up Sunday River ski mountain, and two miles down with a mud pit at the end. It was really freaking fun, but really, when is a medal not fun?
I've been a ginormous, lazy ass since that race, so it's time to get back on the exercise wagon. Now that seminary is over, I want to try to make running a more regular piece of my day again. My goal is to run at least thirty minutes every day between now and Thanksgiving.
Starting tomorrow.
Oh, and I'm running a biathlon this weeked with my mom. Because running and .22ing? Heaven has officially landed on earth.
Posted by Amy

Your leg muscles? Flippin' awesome. Love that pic! You rock in my book, even if you're not teaching seminary anymore. ;)

Crap, you've stolen my idea. Biathlon was my favorite winter Olympic sport because it taught true survival skills. Teaming gun fire with running seems like the next logical step in preparation for the zombie apocalypse.

Maybe my race can require a shotgun instead of a pea shooter like yours...

The fact that you accepted the seminary gig in the first place definitely qualifies you for pioneer status. At LEAST junior pioneer.

You had to mention the Cub Scout popcorn, didn't you? Awesome job on the race. I can't imagine ever agreeing to teach the seminary in the first place (but then I'm not LDS so I can get away with telling my church - No).

PS I love Dooce too and now I have TWO inspiring runners in my life!

Glad you made the decision to get out before you burnt out. Everyone has limits!

Okay, no joke... last night I fell asleep to thoughts of you. Creepy? Well, it wasn't... lol... I was just remembering being in Maine three years ago and how cool it was so hang out with you and Jared and James. And, wondered how you were doing. So, I was really happy to see your update.

I hope it makes you feel better to hear that I asked to be released from teaching seminary after two years, pretty much for the same reasons you listed. There's no shame in being aware of your limits and knowing your priorities. Enjoy sleeping in!

My mom says women can do it all, just not in the same decade. You are BUSY! Enjoy sleeping in. :)

I think you are a saint for agreeing to teach teenagers every day at 6 am for as long as you did. You are my hero :).

yeah- I can hear you on the stresses of teaching seminary... and trying to balance life. It's a seriously tricky calling unless you've been blessed with the gift of being able to wake up early, teach teenagers, and knowing the scriptures inside and out....

If you have no such gifts, like me- this calling can seriously be a hard one. After having a permanent Dr. Pepper IV flowing into my veins 24 hours straight, I've considered going to ask for a release a few times. If I can make it to the end of this month- I can make it through the rest of this year.... I think.

No shame in knowing your limits. Besides, you already taught for more than a year. I'm already where you are and I've only taught a few months :)

I want an air rifle now.

Another mention of the leg muscles here: awesome.