This past Saturday, James turned four. Very exciting, very exciting. Apparently, now that he's four, James wholeheartedly believes that it's socially acceptable to punch your best friend on the playground over and over and over again--you know, until the teacher had to peel him off.

I like to believe that my sweet little guy simply got carried away in the moment as he was doing his best to impersonate The Incredible Hulk. Jared likes to believe that James is average and I'm in denial.

Gosh I love this age.

Either way, I've taken the first step in completing what I'm sure will be a lengthy process--perfecting the art of the parental apology email. Heaven knows I'm always up for learning something new!

Anywho, here's a picture of James blowing out his candles at his party on Saturday. I obviously forgot to buy appropriate birthday candles at the grocery store, which would be the reason for the coconut scented tea candles dotting the cake. James vehemently refused to blow out his candles or eat any cake--after all, he would have much rather sat in the living room, gazing upon his mountain of still-wrapped gifts. However, I used my manipulative mothering skills to at least get this photo op: 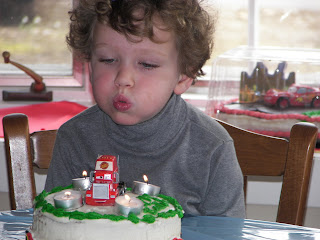 See how puffed up his little cheeks are? That is completely due to the fact that they were filled up with sassy baby swears just waiting to be unleased upon the very woman who gave him the gift of life four years earlier.

Seriously guys, I just love this age.
Posted by Amy

We love you James...and Amy the candles look like rims from an 18 wheeler-like you planned it that way!

Happy Birthday, James! Have fun at the circus tonight, and try to refrain from punching out any clowns. :-) I think they might frown on that sort of thing.

too cute! happy bday james! BTW I will now forever remember his bday - he shares it with my own mama! :)

Happy Birthday, James! My guy, Oliver James, also turned four on Saturday. I have a sinking feeling I probably left a comment just like this last year. So far, four has been very interesting at our house too.

The tea candles...I laughed right out loud when I saw them!!